In a reinforced concrete beam the ductility is because of the steel reinforcement.

The steel provided in the beam is such that both concrete and steel reach the limiting values of strain simultaneously.

The steel provided in the beam is such that steel reach the limiting values of strain prior to concrete. This results in yielding of the steel and the steel could yield till it attains the ultimate strain at which point it breaks. It is important to notice that it is the yielding stain that is considered as failure strain in steel and not the ultimate fracture strain. The steel still has to undergo strain hardening, softening and then fracture. 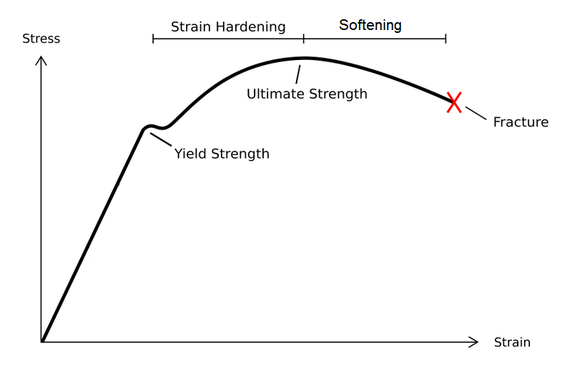 The steel provided in the beam is such that concrete reach the limiting values of strain prior to steel. This results in breaking of concrete and since now there is no concrete present to take the compression the beam fails suddenly.

The additional margin that we get in under reinforced section helps in prevention of a sudden failure and provide the necessary warning to the inhabitants of the building.

At eigenplus, our goal is to teach civil engineering students about structural analysis and design starting from the fundamental principles. We do this with the help of interactive android applications and accompanying web articles and videos.

Our apps have helped more than 400 thousand students across the world to understand and learn the concepts of structural engineering. Check out our apps on the google play store.

Join our mission to bridge the gap between industry and academia by following our LinkedIn page. We're building a community of like-minded industry experts and students to connect, share insights and grow together.